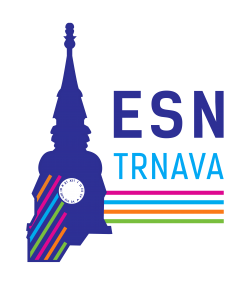 History of the Section:

The first idea of setting up a section was created by our former president Martina Gabajová in November 2011 while she was on Erasmus Programme in Finland. Realisation of agenda started up in between December ´11 – January ´12 in cooperation with doc. Mgr. Martin Klus, PhD. and Coordinator of Mobility for Faculty of Social Sciencies UCM PhDr. Jaroslav Mihálik. As a candidate section we attended National Platform Bratislava 17.-19.2.2012. Our section has been officialy approved as a part of ESN Slovakia.

Since then a lot of things changed. In 2016 our section has started to cooperate with University of Trnava and at mini National Platform in Žilina 11.3-13.3. 2016 we have officialy changed our name to ESN Trnava, so we can act in favour of both universities: University of Ss. Cyril and Methodius and University of Trnava.

Let us now introduce our most important partners:

University of SS. Cyril and Methodius in Trnava

Description of the University:

The present University of Trnava was re-opened on July 1992.

University of Trnava is one of the most prestigious universities in Slovakia.

The University Statute emphasises the compliance with the principles of Magna Charta of the European universities and Christian principles, preaching and teaching truth, freedom and humanitarian ideals of mankind, protecting moral and spiritual values and educating students in the spirit of ecumenism, tolerance and mutual respect. The University of Trnava is a public university and is divided into five faculties: Faculty of Philosophy and Arts, Faculty of Education, Faculty of Health Sciences and Social Work, Faculty of Theology, Faculty of Law.

The first written evidence dates from 1211. It has been written by  Archbishop John of Esztergom. Trnava was the first city in the territory of Slovakia, which had the privilege as a free royal city. Ugrian king Belo IV. gave the city in 1238 Prerogative of the crown directly subordinated to the city and define his rights that enable the rapid development of the city. The original agricultural center began gradually to change the center of production, trade and crafts.In 1792 Anton Bernolák created in the main stand Trnava Slovenské učené tovarišstvo. The building of the theater Trnava townspeople built in 1831. In June 1846 was put into operation the first section of the horse railway in Uhorsko, which took from Bratislava to Trnava.

The rich history of left significant traces - many architectural monuments. Walk the historic center which is the urban conservation area provides an opportunity to familiarize themselves with remarkable architectural complex which are shaped for centuries. Almost regular plan town center is defined fortification. Visitors can explore the town tower, town hall, baroque complex of buildings, Trnava churches which are known mainly thanks to adjective given Trnava Little Rome.Since 1996 the county town of Trnava has almost 70,000 inhabitants. Pulses are rich social, cultural and sport life. In Trnava held many events that goes beyond the city limits

Join us and become a member